It was a time when I could get away from the racist microaggressions that ran rampant through my hometown, but also where I realized that I had no idea where I fit into the world.

It was a time when I learn a lot about myself, but at the same time, I lost my faith in God. It would take many, many years to regain some measure of that back and that’s still a work on progress for me.

I obtained the white man’s degree (which was supposed to be the goal in life, but at the same time, I feel like I achieved nothing that would help catapult me into the world that I was expected to live in.

I spent two years in despair because I felt that I would never be loved by a white man. And this was the greatest thing to achieve, according to how I was raised. The ultimate goal in life was to go to college and get married and have a family and a career. All girls got married and had a family. This was what we had been told over and over growing up. If this wasn’t our reality, there was something wrong with us. I am not the only one who felt the urgency of this expectation. I have had some of my white girl friends who struggled with dating through college, express that same angst. This would never happen if I couldn’t get white guys to like me. So, when it became clear to me that it wasn’t just the boys in my hometown that wouldn’t date me, but also the boys in college, I felt that despair and tried to end my life.

At age 22, graduating from a large university center in New York State, I still had very limited interaction with Black people.

I remain thankful that I didn’t succeed in taking my life. Although some days are still difficult for me, I am very glad that I made it past there and am able to write about it from here.

Once I learned how to push that feeling down and just deal with the despair and the feelings of rejection, I just moved through my life floating on a cloud. I numbed my body and my mind to my reality and I moved forward. I was thinking that I would have to do it all on my own – forever. I don’t know if I was ok with feeling that way, but I was still going to move forward.

And I did. I graduated. I did it where others before me had fallen off and dropped out of school.

I was moving on from there. I had decided that I was going to Knoxville the next year and take Masters level courses in Sociology. I didn’t feel I was ready for law school yet, but I wanted to continue in school and I liked Sociology.

I wish I could say that graduating from UB was one of the greatest accomplishments of my life, but for some reason, I don’t feel that way. I floated through those years and I really have no idea how I graduated. I was so absent from myself and my mind at these times, that if I didn’t have journals I wouldn’t remember a lot of what I have written. And I write from a place of bitterness that the big dream of a great job and a secure life in the middle class was all just a facade. So I am cynical about my degree from UB.

When I was looking for it to take a picture for this post, my husband is astounded that I don’t know where it was. Well, I had it framed once. It fell off the wall and the kids spilled kool aid on it and it was a little piece tore off the side of it. So, I guess it just doesn’t mean that much to me.

The degree that is. I don’t think it makes me any better than anyone who doesn’t have one. Just more educated.

And the education that I secured while I was at the University at Buffalo, is priceless. Meeting new people from all over the world opened my eyes to a world that I would have never been exposed to in Rushford.

So while I can’t say that my degree has translated into this great existence they promised, my experiences there are something that can never be properly measured.

On that day, May 17, 1992, my graduation day from the University at Buffalo, I stood ready to embark into the next phase of my life.

This next step would be where I will be forced to confront the reality of the importance of having a strong racial identity. 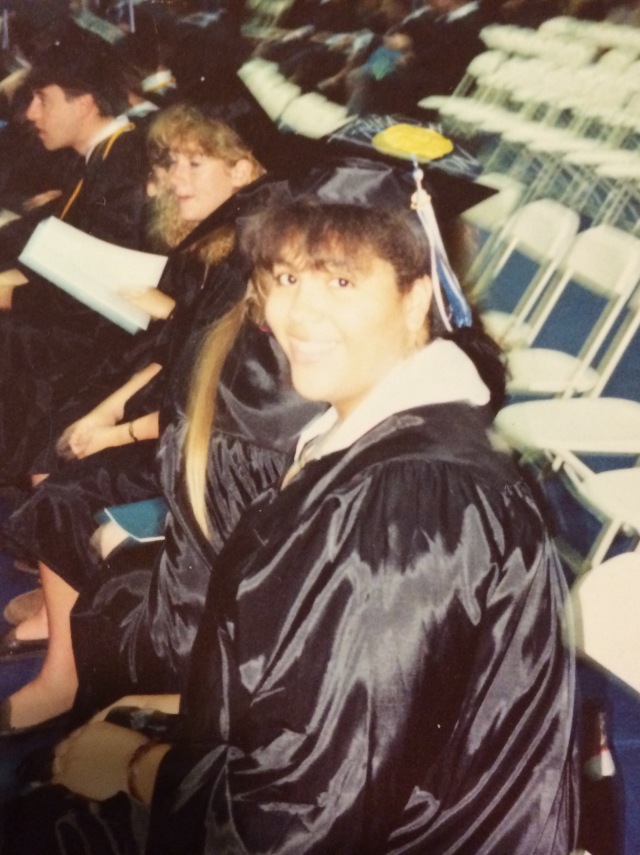 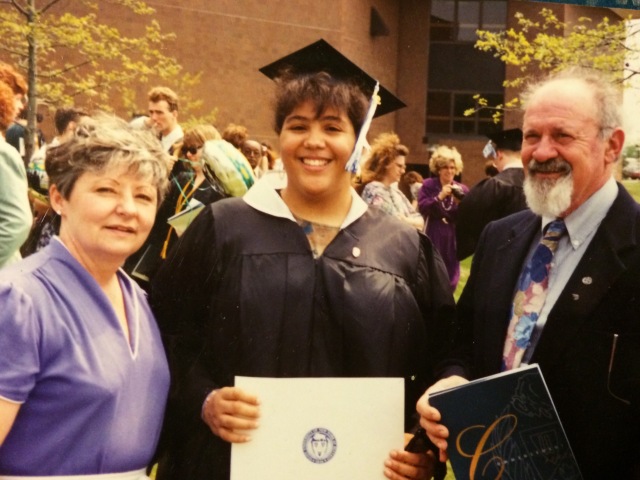