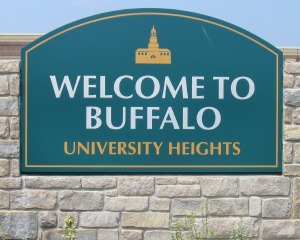 In Buffalo, there is a neighborhood like no other.  It was just described by a resident as a place with the “ebb and flow” of students from the University at Buffalo and young families, of renters and of owner occupied houses.

It was my summer hang out for my years at UB.  From my freshman year on, I always knew someone who lived “off campus” in an apartment.  The houses in the University District are huge old multi-family dwellings from the throw back age when families all lived together in the same house, but with separate living quarters.  Some of the houses were just huge old Victorian houses.  They all had the upstairs and downstairs front porch, a huge attic, a huge basement and a back upstairs porch too.

Basements were sometimes used as a hang out cave – decorated like a psychedelic shack.  One friend had and entire sound system with keyboard synthesizer down in the basement and would keep our drugged minds enraptured for hours.  Others had attics that served that purpose – lava lamps and tapestries with mattresses thrown on carpets.  Many, many basement parties were held in these University Heights homes.

These houses have always been my favorite houses.  And every summer we would come from the North Campus dorms and descend on the University Heights neighborhood and take it all in.

I had friends that lived on Winspear and Lisbon and Minnesota, on Highgate, Heath and Merrimac and all the way down to Shirley.

The Main Street Campus of UB is amazing.  The old architecture of Hayes Hall and the ancillary buildings is setup with sprawling lawns full of ancient oak trees.  I would spend hours on campus just wandering around looking at the trees.  It was a beautiful and magical place where you could close out the world and just enjoy the beauty of nature.

My fraternity friends had houses on Heath that probably should have been condemned, but they threw killer parties at.  My sosority friends had a house on Tyler that I would crash at from time to time.

We ate at places like Mike’s Big Mouth and Pinzone’s pizza.  We got ice cream at Parkside Candy.  We bought books at Talking Leaves and Comic Books at Queen City Books.  We went out and drank at PJ Bottoms’ and Molly’s Pub and Third Base and the frats and sororities went to the Steer.

And when I wanted to “see” the Dead when they weren’t touring, at Broadway Joe’s there was Acoustic Forum every Wednesday night and sometimes Sonic Garden would play.  It was hippie heaven.

We’d hop on the train and ride downtown to see concerts like REM and Andrew Dice Clay (with back stage passes where I met Eddie Griffin) or Sabres games or Bisons’ games at the Aud.

We’d go down to Hertel Avenue and go to Terrapin Station or Mighty Taco.  Sometimes we would go downtown or over the Elmwood Avenue or Allentown to shop and browse.

All in all, it was an amazing place to spend my early twenties.  It doesn’t matter if it was trekking through a foot of snow during a blizzard after the Super Bowl to get to a house or if it was sitting out on someone’s upstairs deck, tripping our faces off comparing my friends face to Bart Simpson.. my memories of the University Heights district were always fun filled.